6 months of aid in Ukraine – partners support thousands with immediate relief, but many remain in need

After 6 months of war in Ukraine, millions of Ukrainians remain in immediate need of support. Across the country, the Dutch Relief Alliance (DRA) has worked together with local partners as part of its Joint Response to provide food and non-food items, multi-purpose cash assistance, and mental healthcare and psychosocial support to vulnerable households affected by the conflict.

In March, the situation across Ukraine was critical. There was a huge humanitarian need, but it was unclear where this need was concentrated and where aid would be most effective. DRA partners hit the ground running, supporting people where they could through local partners. After a few weeks partners were able to map where they could most effectively help out, scaling up relief efforts. Over the course of the last 6 months, the DRA Joint Response has provided a range of relief to hundreds of thousands of people in need across different parts of Ukraine – from the border regions in the West to zones in the East and South.

Regrettably, violence continues in parts of the country. Elsewhere, communities have settled into a sort of status quo. The basic needs remain:  millions of displaced people need all kinds of help, and the country needs a shift towards reconstruction.

Save the Children works together with Avalyst as part of the Ukraine Joint Response. Across the country, in areas including Dutska, Luhanska, Dnipropetrovska and Vinnytsia, Save the Children and Avalyst provide multi-purpose cash and non-food item kits. In the past 6 months, they were able to meet the immediate needs of more than 1000 households.

Avalyst took on the responsibility of registering households, creating an inventory of their needs. After registration, Save the Children took care of cash disbursement, enabling families to determine their own spending on their immediate needs.

Next to non-restricted cash, Avalyst also distributed non-food items, handing Ukrainians in need things like basic hygiene materials, textile, and household goods. In this way, Avalyst and Save the Children help refugees and households to re-establish a semblance of their home routines.

By working together and communicating clearly with local communities, Save the Children and Avalyst have been able to adjust their aid provision to what these communities need. These strong links resulted in more efficient distribution and helped to avoid wasted goods.

Caritas Ukraine, Cordaid’s local partner in the Joint Response, chose to focus on distributing non-food items and hygiene kits. In areas around Dnipro and Kyiv, as well as in Ivano-Frankivsk, Caritas found that internally displaced people were most urgently in need of physical items that they lacked access to. Through its dioceses across these areas, Caritas provided emergency food packages, drinking water, warm kits and medical supplies. 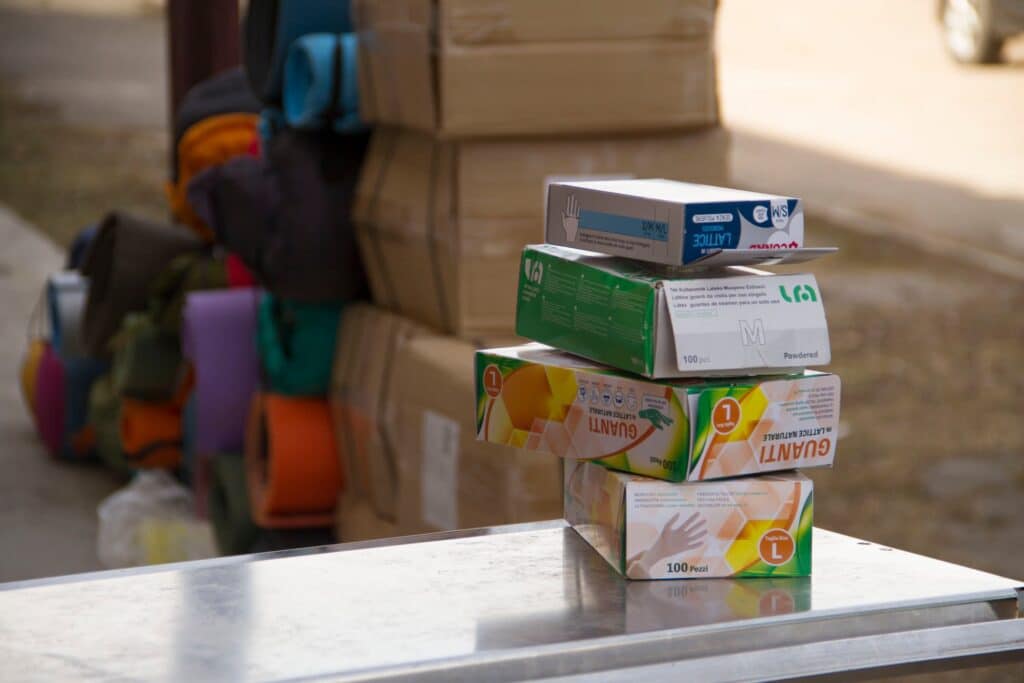 In Muchacova a town of 75.000 inhabitants where New Beginning works, an additional of 26.000 refugees from other parts of Ukraine have arrived – including many families with vulnerable children. New Beginning has been a partner of Dorcas for years, focusing on marginalised children. With the start of the Ukraine Joint Response in March, Dorcas and New Beginning have strengthened their partnership to meet the basic needs of refugees, providing food parcels and psychosocial support.

Internally displaced people (IDPs) get to know New Beginning when they come for food support or clothing. Through this first connection New Beginning is able to ask them their needs. IDPs are welcomed to join activities that incorporate elements of psychosocial support. Only 2% of IDPs ask for psychosocial support themselves because of feelings of shame and the taboo on mental health struggles. Good experiences with the children’s clubs lead IDPs to encourage their friends to participate, enabling more children to receive psychosocial support.

New Beginning offers a range of social activities, like a 5 day camp for children and a weekly children’s’ club. While the children play and take part in activities as part of the club, the parents – mainly mothers – go upstairs to have their own meeting and build connections with each other.

According to Alexandra, the Director of New Beginning, “if parents are at rest and show peaceful behaviour, children also develop healthy habits and feel less anxious. We focus firstly on the basic needs and on the parents – then by extension the children will recover. New Beginning has the aim to offer a new beginning. We follow our desire to help the people.”

While the Ukraine Joint Response came to an end in early September after 6 months, the partnerships established by working together as part of the Joint Response will endure. The conflict rages on and needs remain. Reconstruction of communities, both in cities and in rural areas, will be a focus for the next months and years to return a sense of normality to the lives of Ukrainians.

The peer-to-peer approach under the Joint Response, characterised by trust and equal partnership, has already resulted in ideas and proposals for further cooperation after the end of the Joint Response. Working side by side to rapidly scale the response, overcoming together the myriad obstacles along the way, strengthened the abilities of both side of the partnership. Despite the formal end of the Joint Response, exchange of information, knowledge and best-practices between the Dutch and local partners will continue. Where possible, the DRA partners will support Caritas, Avalyst, and New Beginning, alongside other local partners, in their efforts to reconstruct their country.